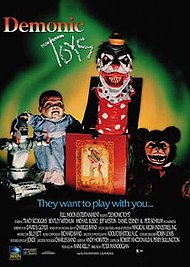 Mr. Static is a major antagonist in the 1991 American comedy-horror film Demonic Toys.

Mr. Static is a demonically possessed toy robot whose goal is to aid his demonic master in his plan to impregnate a human woman and transfer his consciousness to her baby.

Mr. Static is a silver, semi-humanoid robot whose legs are replaced with motorized treads. Its head is helmet-like, with two rectangular eye sockets and a large rectangular hole where a mouth would be. Both of its arms end in laser cannons.

Mr. Static is shot to death by Judith and Mark. 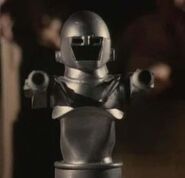 Add a photo to this gallery
Retrieved from "https://movie-monster.fandom.com/wiki/Mr._Static?oldid=2952"
Community content is available under CC-BY-SA unless otherwise noted.