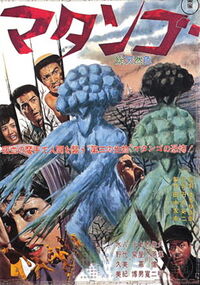 The Mushroom People are the main antagonists of the 1963 Japanese horror film Matango.

After their ship is damaged in a storm, a crew of Japanese sailors becomes stranded on an island with a species of strange mushrooms that transform those who eat them into mushroom/human hybrids.

Mushroom People are mutated humans with brown lumpy skin. Their heads have been replaced by lumpy mushroom caps and their arms and legs are bulbous and bloated.

The Mushroom People survive the events of the film and the main protagonist is shown to have transformed into one after making it to the mainland.

Add a photo to this gallery
Retrieved from "https://movie-monster.fandom.com/wiki/Mushroom_People?oldid=1398"
Community content is available under CC-BY-SA unless otherwise noted.