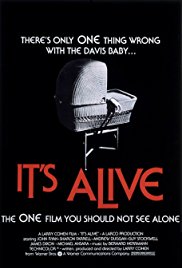 The Mutant Baby is the main antagonist of the 1974 American horror film It's Alive and its 2009 remake.

A Los Angeles couple named Frank and Lenore Davis give birth to their second child, but it is mysteriously born as a murderous mutant that escapes and kills when it is frightened.

The Mutant Baby possesses the following powers and abilities:

The baby is shot to death by police. However, the end of the film indicates that more Mutant Babies are being born across the country.

Add a photo to this gallery
Retrieved from "https://movie-monster.fandom.com/wiki/Mutant_Baby?oldid=2417"
Community content is available under CC-BY-SA unless otherwise noted.