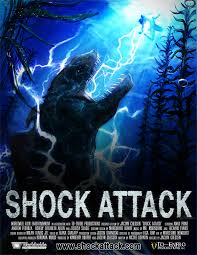 The Mutant Electric Eel is the main antagonist of the 2015 American horror film Shock Attack.

When a well-meaning scientist enacts a plan to produce clean, renewable energy, a bizarre mutant eel is created with the ability to spit electricity out of its mouth.

The Mutant Electric Eel closely resembles a typical moray eel with gray skin, although it is constantly radiating with electricity.

The Mutant Electric Eel possesses the following powers and abilities:

The eel is killed after it is tricked into attacking a motorboat. Its electricity ignites the gasoline in the fuel tank, causing the boat to explode and kill the eel.

Add a photo to this gallery
Retrieved from "https://movie-monster.fandom.com/wiki/Mutant_Electric_Eel?oldid=1202"
Community content is available under CC-BY-SA unless otherwise noted.