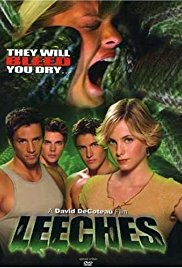 The Mutant Leeches are the main antagonists of the 2003 American horror film Leeches!.

When a group of leeches suck the blood of steroid-abusing swimmers, they grow to enormous size and gain an unquenchable thirst for human blood.

The mutant leeches are 2-3 feet in length, black in color, and covered with seemingly armored plates.

The Mutant Leeches possesses the following powers and abilities:

The leeches are lured into a swimming pool, which is then electrified. However, it is revealed at the end that one of the swim team members helped to create them intentionally and has several surviving specimens.

Add a photo to this gallery
Retrieved from "https://movie-monster.fandom.com/wiki/Mutant_Leeches?oldid=1440"
Community content is available under CC-BY-SA unless otherwise noted.