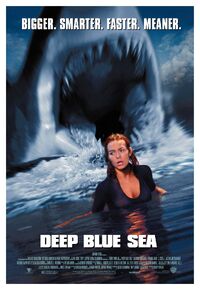 Secretly and illegally genetically engineered with larger brains in order to harvest brain chemicals that could help cure Alzheimer's in humans, these sharks have near-human intelligence and are therefore much more dangerous than your typical shark.

The Mutant Mako Sharks are three large hyper-intelligent shortfin mako sharks. The trio are composed of two twin male Generation 1 modified sharks and a Generation 2 genetically engineered female. The small sharks stretch 9-13 feet, while the big shark measures in as a massive 26 feet in length.

The Mutant Mako Sharks possess the following powers and abilities:

After ravaging the sinking base that birthed them, the first of the sharks, one of the twins, dies from the station's cook causing a gas line explosion in the flooded kitchen. The second shark is electrocuted by the chief geneticists when she throws a power cable into the flooded room it was swimming in. The Generation 2 shark is killed by the combined efforts of the cook and station's shark wrangler attaching an explosive harpoon to it.