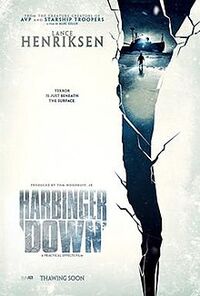 Shapeshifting
Biomass assimilation
The Mutant Tardigrades are the main antagonists of the 2015 American horror film Harbinger Down.

Like most tardigrades, these are microscopic, eight-legged creatures with cylindrical mouths. In large groups, these mutants are capable of infecting and assimilating living things and transforming their bodies into horrific monsters.

The Mutant Tardigrades possess the following powers and abilities:

The final conglomeration of tardigrades is frozen in the ice after Sadie intentionally crashes the ship into an iceberg. However, with rescue choppers closing in, it is implied that they will spread to the mainland.