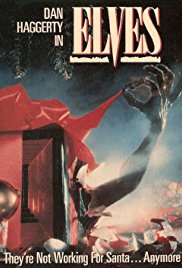 The Nazi Elf is the main antagonist of the 1989 American horror film Elves.

Young teenager Kirsten is performing an "anti-Christmas" pagan ritual in the woods with her friend when she accidentally cuts herself, her blood awakening an evil Christmas elf that was worshipped by the Nazis.

The elf is an emaciated humanoid with a wrinkled face and a pointed nose with flared nostrils. Its head is mostly bald, but its body is covered with patchy gray hair. It has pointed ears, sharp teeth, and sharp claws, giving it a vampire-like appearance.

Using an "elfstone" from her grandfather's study, Kirsten performs a ritual that destroys the demonic elf. 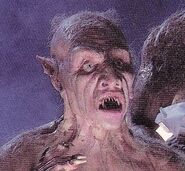 Add a photo to this gallery
Retrieved from "https://movie-monster.fandom.com/wiki/Nazi_Elf?oldid=1397"
Community content is available under CC-BY-SA unless otherwise noted.