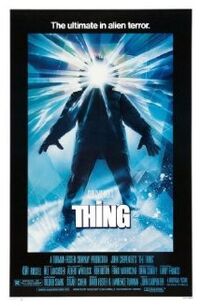 The Norris-Thing is a minor antagonist in the 1982 American horror film The Thing.

This Thing is born from crew member Norris, who appears to have a sudden heart attack. When Dr. Copper attempts to defibrillate him, Norris transforms into a Thing and devours Copper's arms.

Initially, the Norris-Thing simply resembles Norris, but it has an enormous gaping mouth lined with teeth in the middle of its torso. After severing Copper's arms, the Norris-Thing expels the second form out of its torso cavity. This second form is a spider-like creature with six spindly legs, two human-like legs dangling from it, and several dangling entrails. This second form also has a distorted version of Norris's head on the end of a long segmented neck. When this second form is burned, the initial Norris-Thing detaches its own head, which becomes a third creature resembling an upside-down human head with snail-like eyestalks and spider legs.

The Norris-Thing possesses the following powers and abilities:

The Norris-Thing is killed after MacReady burns it alive. This applies to all three forms. 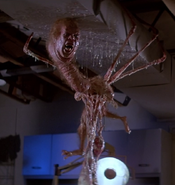 Add a photo to this gallery
Retrieved from "https://movie-monster.fandom.com/wiki/Norris-Thing?oldid=546"
Community content is available under CC-BY-SA unless otherwise noted.