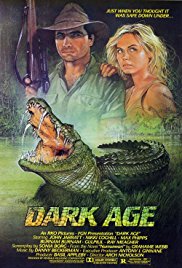 The Numunwari, also known as the Dreaming Crocodile, is a major antagonist in the 1987 Australian horror film Dark Age.

A park ranger in the Australian outback is tasked with locating and capturing a gigantic crocodile that has been killing numerous locals.

The Numunwari is a large saltwater crocodile stretching over 20 feet in length.

The Numunwari possesses the following powers and abilities:

The Numunwari is tranquilized and released into the wild, far from civilization.

Add a photo to this gallery
Retrieved from "https://movie-monster.fandom.com/wiki/Numunwari?oldid=2185"
Community content is available under CC-BY-SA unless otherwise noted.