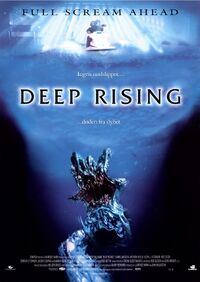 Octalus is the main antagonist of the 1998 American horror film Deep Rising.

This gigantic octopus-like creature attacked the luxury cruise ship known as the Argonaut, killing nearly its entire crew and a good deal of the passengers as well.

Octalus is a large cephalopod-like organism with a gnashing lamprey-like mouth and two large blue eyes. She has brown slimy skin and between 8 and 10 octopus-like tentacles that stretch nearly 80 or so feet. The tips of these tentacles can open up like grotesque flower petals to reveal even more lamprey-like mouths.

The creature is killed after a mercenary ship is rammed into the Argonaut, causing an explosion that blows up the monster. However, it is implied that there are more of her species.

Add a photo to this gallery
Retrieved from "https://movie-monster.fandom.com/wiki/Octalus?oldid=2899"
Community content is available under CC-BY-SA unless otherwise noted.