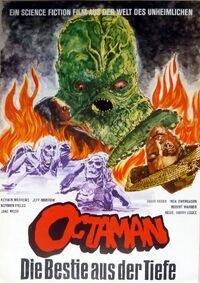 The large amount of radiation in a lake near a Mexican fishing community has caused one member of a species of freshwater octopus to mutate into a humanoid monster.

The Octaman is a semi-humanoid creature with tannish skin. It walks on two legs and has four tentacular arms. His head has two small orange eyes and a circular mouth with numerous small teeth.

The Octaman possesses the following powers and abilities:

The expedition members shoot Octaman sufficiently to make it retreat to the lake and die.

Add a photo to this gallery
Retrieved from "https://movie-monster.fandom.com/wiki/Octaman?oldid=724"
Community content is available under CC-BY-SA unless otherwise noted.