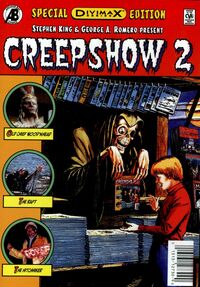 The Oil Blob is a major antagonist in the 1987 American comedy-horror film Creepshow 2.

When four teenagers decide to sneak into a forest and visit the local lake, they ignore the "No Swimming" signs and are subsequently attacked by a black gelatinous creature.

The Oil Blob is a large gelatinous mass of oily black sludge.

The Oil Blob possesses the following powers and abilities:

The Oil Blob survives to the end of the film, successfully consuming all four teenagers.

Add a photo to this gallery
Retrieved from "https://movie-monster.fandom.com/wiki/Oil_Blob?oldid=1192"
Community content is available under CC-BY-SA unless otherwise noted.