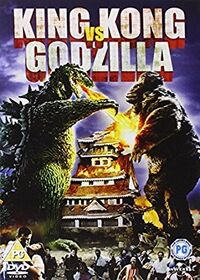 Oodako, also known as the Giant Octopus, is a minor antagonist in the 1962 Japanese kaiju film King Kong vs. Godzilla.

Oodako is a giant octopus who briefly slithers ashore on Farou Island to steal special berry juices from the natives, but it is interrupted by King Kong.

Oodako is an enormous beige-colored octopus with no other distinguishing features.

After being beaten up by King Kong, the octopus flees back into the ocean.

Add a photo to this gallery
Retrieved from "https://movie-monster.fandom.com/wiki/Oodako?oldid=2048"
Community content is available under CC-BY-SA unless otherwise noted.