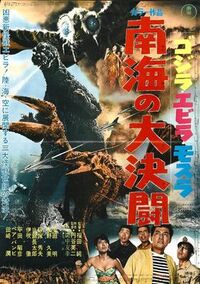 Ookondoru, also known as the Giant Condor and Oowashi, is a minor antagonist in the 1966 Japanese kaiju film Ebirah, Horror of the Deep.

Godzilla briefly fights with this enormous bird on Letchi Island after it swoops down and attacks him.

Ookondoru is an enormous brown vulture with a gray bald head.

Godzilla roasts the creature, causing its burnt corpse to sink into the ocean.