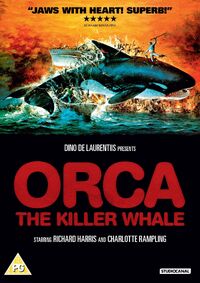 The Orca is the main antagonist of the 1977 American horror film Orca.

When a boat captain kills an orca whale that steals its catch, the whale's mate becomes hellbent on getting revenge against the sailor.

The Orca is a standard orca whale with no real notable features.

The Orca possesses the following powers and abilities:

After successfully killing Nolan, the whale swims underneath the ice. However, as the credits roll, the whale is shown attempting to break through the ice to breathe, implying that it drowns.

Add a photo to this gallery
Retrieved from "https://movie-monster.fandom.com/wiki/Orca?oldid=1451"
Community content is available under CC-BY-SA unless otherwise noted.