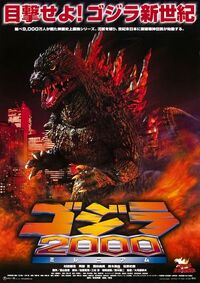 Orga is the deformed result of the collective form of the Millennian aliens attempting to absorb the DNA of Godzilla.

Orga is a hulking, hunch-backed creature with bluish-gray skin. Said skin has a bumpy, uneven texture. It has a small head with a slight underbite, small eyes, enormous hands with a thumb and two fingers, and a stubby tail.

After Orga attempts to swallow Godzilla whole with its extendable maw, the latter unleashes his atomic breath while inside Orga's stomach, blowing it apart from the inside. 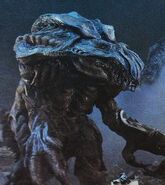 Add a photo to this gallery
Retrieved from "https://movie-monster.fandom.com/wiki/Orga?oldid=1638"
Community content is available under CC-BY-SA unless otherwise noted.