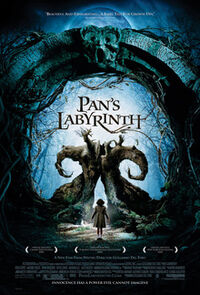 The Pale Man is a major antagonist in the 2006 Spanish fantasy-horror film Pan's Labyrinth.

During one of her tasks, young Ophelia is sent into the lair of this humanoid monster, who sits at a long dinner table filled to the edges with tempting food. When Ophelia disobeys the Faun's orders and eats some grapes from the table, the Pale Man awakens and chases her through his domain.

The Pale Man is a tall emaciated humanoid with saggy, wrinkled, Caucasian-color skin. His face lacks eyes of any kind, its only defining features being its frog-like nostrils and lipless mouth. The creature's most distinguishing feature is the eyes embedded in the palms of its hands, which can be removed and inserted at will. In addition, the monster's fingers end in long black claws.

The Pale Man possesses the following powers and abilities:

The Pale Man survives the events of the film, being sealed away in its lair.

Add a photo to this gallery
Retrieved from "https://movie-monster.fandom.com/wiki/Pale_Man?oldid=1205"
Community content is available under CC-BY-SA unless otherwise noted.