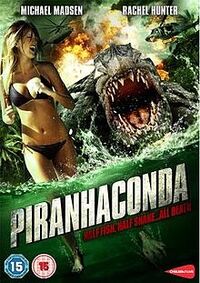 The Piranhacondas are the main antagonists of the 2012 American horror film Piranhaconda.

After a scientist steals their eggs, a pair of Piranhacondas become hyper-aggressive and go on a murderous rampage in an attempt to retrieve their offspring.

The Piranhaconda resembles an enormous Chernobyl snake with a piranha-like head. It has small eyes and three ridges on its head. Most of its body is brown in color, but its back features black spots and there are yellowish-orange spots running down its sides.

The Piranhacondas possess the following powers and abilities:

The first Piranhaconda is killed by its mate after the latter smells the former's blood. It is revealed at the end that a third Piranhaconda survives the events of the film.