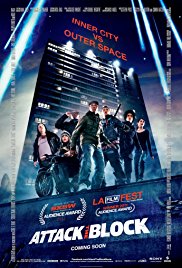 The Pitch Black Aliens are the main antagonists of the 2011 British comedy-horror film Attack the Block.

The Pitch Black Aliens are sexually dimorphic creatures thought to drift through space in airtight cocoons like fungal spores, waiting for a planet to land on and invade.

The Pitch Black Aliens are gorilla-sized, gorilla-like creatures with no eyes, fur so black that it reflects no light (i.e. vanta-black), and 2-3 rows of large sharp teeth that glow a bright blue. The females are smaller, almost dog-sized, and are completely hairless.

The Pitch Black Aliens possess the following powers and abilities:

One of the aliens is killed with a samurai sword, but the rest are killed after being sprayed with petrol and set on fire.

Add a photo to this gallery
Retrieved from "https://movie-monster.fandom.com/wiki/Pitch_Black_Aliens?oldid=986"
Community content is available under CC-BY-SA unless otherwise noted.