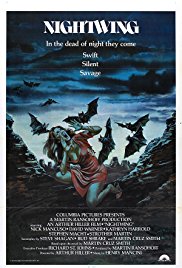 The Plague Bats are the main antagonists of the 1979 American horror film Nightwing.

A series of mysterious cattle mutilations on the Hopi Indian reservation in New Mexico is discovered to be the work of a colony of vampire bats infected with the bubonic plague.

The Plague Bats possess the following powers and abilities:

The bats are eventually trapped in a cave, which is then filled with fire.

Add a photo to this gallery
Retrieved from "https://movie-monster.fandom.com/wiki/Plague_Bats?oldid=2244"
Community content is available under CC-BY-SA unless otherwise noted.