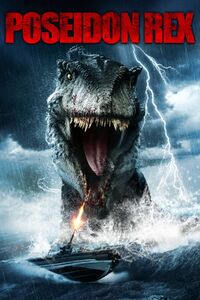 Poseidon Rex is the main antagonist of the 2013 American horror film Poseidon Rex.

While illegally diving for gold off the coast of Belize, a crew of mercenaries accidentally awaken a gigantic sea-dwelling dinosaur from its 60,000-year hibernation on the ocean floor.

Poseidon Rex is a large Tyrannosaur with yellowish-brown scales and large blue fins above each eye, similar fins running down its back, and one encircling its tail.

Sarah manages to kill the creature after blowing up its head with a rocket launcher.

Add a photo to this gallery
Retrieved from "https://movie-monster.fandom.com/wiki/Poseidon_Rex?oldid=2613"
Community content is available under CC-BY-SA unless otherwise noted.