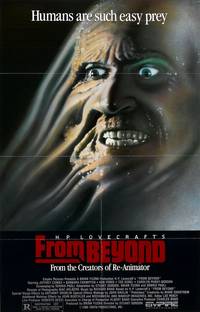 The Pretorius Creature, formerly known as Dr. Edward Pretorius, is the main antagonist of the 1986 American horror film From Beyond.

An experiment designed to allow humans to see beyond that which is normally perceptible results in the head scientist being pulled into a parallel universe by demons and returned as a mutated creature.

The Pretorius Creature is a somewhat humanoid entity with pinkish wet skin. Its feet have four toes each, each of which end in a sharp toenail, and its hands end in five fingers, the ring and pinky fingers being incredibly short and stubby. The enormous hunchbacked monster has a long neck and a phallic head with Pretorius's face.

The Pretorius Creature possesses the following powers and abilities:

Crawford, after being eaten and assimilated by Pretorius, begins to rip through the latter's body so as to take control, causing the ruptured creature to be digested by its own digestive fluids.

Add a photo to this gallery
Retrieved from "https://movie-monster.fandom.com/wiki/Pretorius_Creature?oldid=2300"
Community content is available under CC-BY-SA unless otherwise noted.