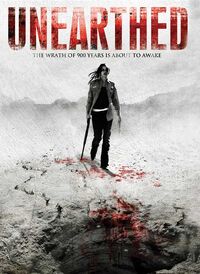 The Probe Alien is the main antagonist of the 2007 American horror film Unearthed.

When an archaeological dig near a small town in New Mexico accidentally unearths an ancient alien creature engineered by a long-gone civilization, it goes on a killing spree and begins stealing the DNA of other creatures.

The creature is a tall thin humanoid with dark skin, a long sloping tail, digitigrade legs, a slightly hunched back, and long arms.

The Probe Alien possesses the following powers and abilities:

The creature is seemingly killed after coming into contact with uranium, the only substance that can hurt it. The protagonists then bury it once more.

Add a photo to this gallery
Retrieved from "https://movie-monster.fandom.com/wiki/Probe_Alien?oldid=995"
Community content is available under CC-BY-SA unless otherwise noted.