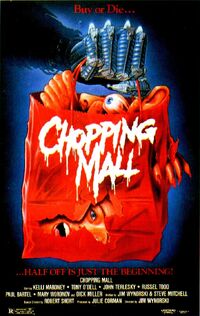 The Protector Killbots are the main antagonists of the 1986 American horror film Chopping Mall.

The Park Plaza Mall has just unveiled its new security force: a group of robots designed to act as night watchmen. However, their control box is struck by lightning, causing them to malfunction and kill anyone they encounter.

The robots stand approximately five feet in height and are made of a silvery metal. Their heads are vaguely football-shaped if viewed from the front, and their faces are dominated by rectangular red eyes. They have two arms, numerous wires on their bodies, and tank treads instead of feet.

The Protector Killbots possess the following powers and abilities:

Protector Two is smashed by an elevator, Protector Three is electrocuted, and Protector One is blown up.

Add a photo to this gallery
Retrieved from "https://movie-monster.fandom.com/wiki/Protector_Killbots?oldid=2950"
Community content is available under CC-BY-SA unless otherwise noted.