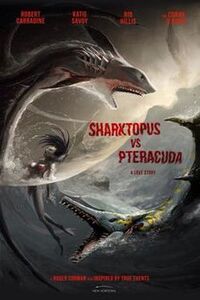 The Pteracuda is the main antagonist of the 2014 American horror film Sharktopus vs. Pteracuda.

The Pteracuda was created by Dr. Rico Symes as yet another biological weapon, but after a rogue hacker takes control of the beast to sell it to the highest bidder, the human race must rely on the offspring of the original Sharktopus to stop the mutant.

The Pteracuda is a large pterosaur-like creature with a yellow and blue back and a white underbelly with two rows of black spots on its chest. Its head and tail are very barracuda-like, with its main body and wings being that of a pterosaur.

The Pteracuda possesses the following powers and abilities:

The Pteracuda is killed after it is fitted with a remote control bomb, which is then detonated while the creature is engaged in battle with the Sharktopus.

Add a photo to this gallery
Retrieved from "https://movie-monster.fandom.com/wiki/Pteracuda?oldid=1676"
Community content is available under CC-BY-SA unless otherwise noted.