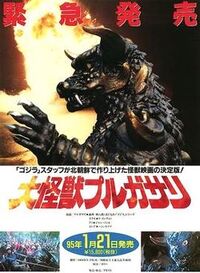 Pulgasari is the main character of the 1985 North Korean kaiju film Pulgasari.

A small monster figurine comes into contact with its sculptor's daughter's blood, turning it into an enormous monster that grows exponentially whenever it eats metal.

Pulgasari is a muscular minotaur-like creature with dark brown fur, large horns, and plates of golden armor covering its underbelly.

Ami tricks Pulgasari into eating her, causing it to transform into a stone statue. The statue crumbles, revealing a baby version of Pulgasari that is then sucked into Ami's lifeless body.

Add a photo to this gallery
Retrieved from "https://movie-monster.fandom.com/wiki/Pulgasari?oldid=3006"
Community content is available under CC-BY-SA unless otherwise noted.