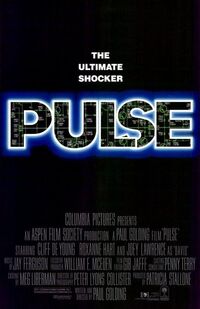 The Pulse is the main antagonist of the 1988 American horror film Pulse.

When electricity is given sentience through unknown means, it tires of serving humans and seeks out the house of a Los Angeles family to terrorize them.

The Pulse is a paranormal entity made entirely out of non-anthropomorphic electricity.

The Pulse possesses the following powers and abilities:

The Pulse is seemingly killed after the powerline fueling it is chopped down, but it is revealed that it has simply moved on to another house.

Add a photo to this gallery
Retrieved from "https://movie-monster.fandom.com/wiki/Pulse?oldid=1455"
Community content is available under CC-BY-SA unless otherwise noted.