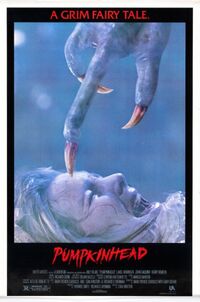 Pumpkinhead is the main antagonist of the 1988 American fantasy-horror film Pumpkinhead.

When a gang of bikers accidentally kills the son of small town store owner Ed Harley, he attempts to gain revenge by summoning a large demonic creature named Pumpkinhead.

Pumpkinhead is a tall humanoid figure with dirty brown skin. His body is emaciated and almost skeletal, his rib cage being visible through his skin. Pumpkinhead's legs are digitigrade and end in three-toed feet with sharp claws. Pumpkinhead has a long tail, two spikes on his hips, and two large appendages on his shoulders. His head is bulbous, like that of a typical grey alien.

Ed Harley sacrifices himself to kill the creature, as their physical and emotional link means that Pumpkinhead will die if Harley does.

Add a photo to this gallery
Retrieved from "https://movie-monster.fandom.com/wiki/Pumpkinhead?oldid=2281"
Community content is available under CC-BY-SA unless otherwise noted.