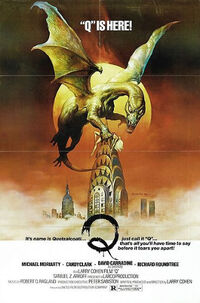 Quetzalcoatl is the main antagonist of the 1982 American horror film Q.

An Aztec god brought to New York City by an ancient Aztec cult, Quetzalcoatl the winged serpent roosts atop the Chrysler Building in preparation for its offspring to hatch.

Quetzalcoatl is an enormous dragon-like creature with thin arms and legs, dark orange scales, and enormous wings. Its mouth is a toothless beak and its feet are armed with long fingers ending in sharp claws. Its wings appear to have feathers or tassels of flesh.

The Quetzalcoatl possess the following powers and abilities:

Detective Shephard and a paramilitary squad engage in an airplane battle with the creature that ends in it falling to its death off the Chrysler Building. At the end of the film, one of the creature's remaining eggs is seen hatching.

Add a photo to this gallery
Retrieved from "https://movie-monster.fandom.com/wiki/Quetzalcoatl?oldid=2081"
Community content is available under CC-BY-SA unless otherwise noted.