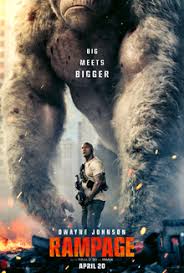 Ralph is a major antagonist in the 2018 American action-comedy-horror film Rampage.

Once a normal gray wolf living with his pack in a forest in Wyoming, Ralph was mutated into a gigantic creature by an experimental genetic editing mutagen created by Energyne.

Ralph is an enormous gray wolf with bat-like ears, striped porcupine quills emerging from his back, a long thin tail, and flesh tone gliding membranes between his legs like a flying squirrel.

Ralph is tricked by Davis into gliding towards Lizzie, who rips the wolf's head off with her jaws and swallows it.

Add a photo to this gallery
Retrieved from "https://movie-monster.fandom.com/wiki/Ralph?oldid=2599"
Community content is available under CC-BY-SA unless otherwise noted.