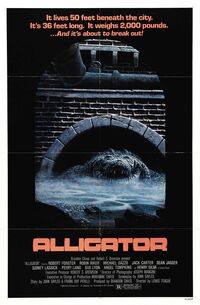 Ramón is the main antagonist of the 1980 American horror film Alligator.

After being flushed down the toilet, Ramón survived by eating animal carcasses that had been used to test experimental growth formulas designed to increase the size and productivity of livestock, causing him to grow to massive proportions.

Ramón is a mutated American alligator stretching approximately 40 feet in length and being covered in brownish-green scales.

Ramón is killed after the two protagonists blow him up with explosives.

Add a photo to this gallery
Retrieved from "https://movie-monster.fandom.com/wiki/Ram%C3%B3n?oldid=2557"
Community content is available under CC-BY-SA unless otherwise noted.