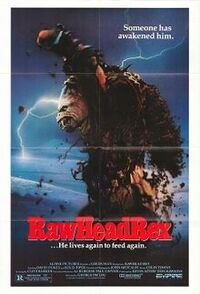 Rawhead Rex is the main antagonist of the 1986 British fantasy-horror film Rawhead Rex.

The ancient Irish demon known as Rawhead Rex was imprisoned underneath a stone pillar, but when three farmers accidentally release him from his prison, he goes on a killing spree.

Rawhead Rex is a tall humanoid figure with dirty brown skin. His face is somewhat primate-like, with numerous sharp teeth and a scrunched-up face. He has long black hair on his head, small eyes, and tattered black clothing.

The Rawhead Rex possess the following powers and abilities:

Rawhead Rex is killed by numerous energy beams fired at him by a feminine figure that emerged from the stone column. He is then crushed with large stones.

Add a photo to this gallery
Retrieved from "https://movie-monster.fandom.com/wiki/Rawhead_Rex?oldid=191"
Community content is available under CC-BY-SA unless otherwise noted.