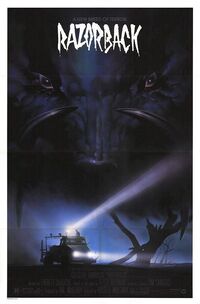 The Razorback is the main antagonist of the 1984 Australian horror film Razorback.

The Razorback was a gigantic wild boar that roamed the Australian outback, slaughtering any animals and humans it encountered.

The Razorback is a gigantic boar with shaggy gray hair and two pairs of tusks: one on the top jaw pointing down and another on the bottom jaw pointing up.

The Razorback possesses the following powers and abilities:

The monster is killed by being tossed off of a conveyor belt and into a gigantic fan in a factory.

Add a photo to this gallery
Retrieved from "https://movie-monster.fandom.com/wiki/Razorback?oldid=2549"
Community content is available under CC-BY-SA unless otherwise noted.