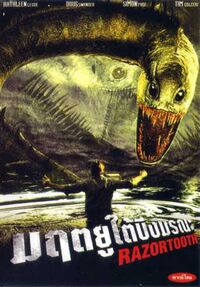 The Razortooth is the main antagonist of the 2007 American horror film Razortooth.

Genetically modified to be amphibious, the Razortooth is a massive eel that goes on a murderous rampage in the Florida Everglades.

The Razortooth resembles an enormous blue eel with green mottled patterns on its back. Its face consists of a large underbite, medium-sized black eyes with no pupils, and gigantic needle-like teeth like those of an anglerfish. It also has a row of spines down its back.

The Razortooth possesses the following powers and abilities:

The Razortooth is killed after the main characters blow it up.

Add a photo to this gallery
Retrieved from "https://movie-monster.fandom.com/wiki/Razortooth?oldid=441"
Community content is available under CC-BY-SA unless otherwise noted.