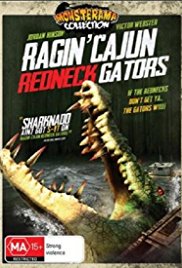 When tainted moonshine is spilled into a Mississippi bayou, it causes several American alligators to mutate into aggressive monsters capable of transforming humans into similar creatures.

The Redneck Gators are large brownish alligators with red throats. They have large quills on their tails that can be used to infect humans. Humans that have been transformed do retain features of their previous selves, such as gold teeth or personality traits.

The Redneck Gators possess the following powers and abilities:

Most of the gators are taken out by small arms fire to the head.

Add a photo to this gallery
Retrieved from "https://movie-monster.fandom.com/wiki/Redneck_Gators?oldid=1238"
Community content is available under CC-BY-SA unless otherwise noted.