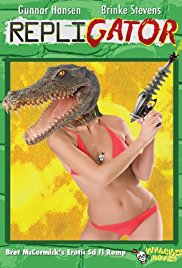 A secret perverted military project transforms unwitting humans into attractive, sex-craving women. However, a bug in the transformation process causes these women to transform into reptilian beasts when they orgasm.

The Repligators resemble attractive, scantily-clad women with heads similar to those of alligators or theropod dinosaurs.

The Repligators possess the following powers and abilities:

The Repligators are turned back into their human forms by special ray guns.

Add a photo to this gallery
Retrieved from "https://movie-monster.fandom.com/wiki/Repligators?oldid=1021"
Community content is available under CC-BY-SA unless otherwise noted.