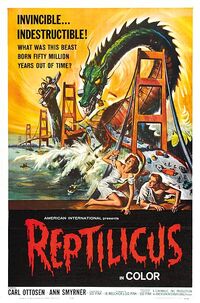 Reptilicus is the main antagonist of the 1961 Danish-American kaiju film Reptilicus.

When Danish miners unearth a piece of flesh from a long-dormant reptile and bring it back for study, it thaws out and begins to regenerate a new body, transforming into a draconic beast that goes on a rampage.

Reptilicus resembles an enormous snake-like creature with short legs. Its head is dragon-like, with snake-like fangs and a forked tongue. It has gray scales that are loose and resemble feathers. It also has small wings.

Reptilicus is knocked unconscious with sedatives and shot in the mouth with a rocket launcher. However, the ending implies that Reptilicus will regenerate once again.

Add a photo to this gallery
Retrieved from "https://movie-monster.fandom.com/wiki/Reptilicus?oldid=1776"
Community content is available under CC-BY-SA unless otherwise noted.