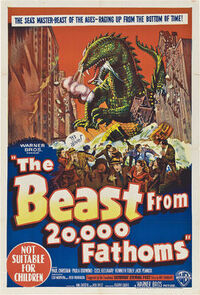 The Rhedosaurus is the main antagonist of the 1953 Danish-American science fiction monster film The Beast from 20,000 Fathoms.

Nuclear tests in the Arctic Circle have accidentally thawed out and awakened a gigantic dinosaur that threatens humanity due to its blood containing a deadly virus.

The Rhedosaurus resembles a large monitor lizard with dark gray scales and a row of spines running down its back.

The Rhedosaurus possesses the following powers and abilities:

The creature is shot in the neck with a radioactive isotope, causing it to undergo heatstroke and die.

Add a photo to this gallery
Retrieved from "https://movie-monster.fandom.com/wiki/Rhedosaurus?oldid=2823"
Community content is available under CC-BY-SA unless otherwise noted.