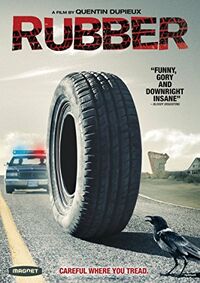 Robert the Tire is the main antagonist of the 2010 French comedy-horror film Rubber.

For unknown reasons, a tire named Robert springs to life in a Californian desert and begins rolling about the landscape, using his psychic powers to blow up the heads of anything or anyone he encounters.

Robert the Tire is a black tire measuring at least in a foot and a half in diameter.

Robert the Tire possesses the following powers and abilities:

After being cornered in an apartment building, Robert is destroyed with a shotgun. However, he almost immediately is reincarnated as a tricycle. The film ends with him leading a small army of sentient tires to Hollywood.

Add a photo to this gallery
Retrieved from "https://movie-monster.fandom.com/wiki/Robert_the_Tire?oldid=1249"
Community content is available under CC-BY-SA unless otherwise noted.