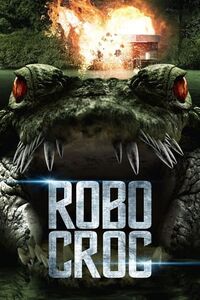 The Robocroc is the main antagonist of the 2013 American horror film Robocroc.

The Robocroc is a cyborg crocodile created when a government space probe burned up on re-entry and released a swarm of military nanobots into a local zoo, which transformed the crocodile they infested into a mechanical monster.

The Robocroc resembles a large crocodile made of light gray metal with red highlights on its back and glowing red eyes. It also has a row of blades running down its back.

The Robocroc possesses the following powers and abilities:

The Robocroc is killed after an explosive is thrown into its mouth.

Add a photo to this gallery
Retrieved from "https://movie-monster.fandom.com/wiki/Robocroc?oldid=737"
Community content is available under CC-BY-SA unless otherwise noted.