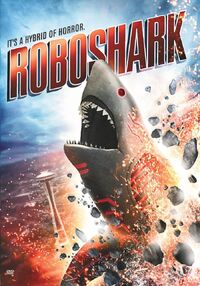 The Roboshark is the main antagonist of the 2015 American horror film Roboshark.

After consuming an alien probe that crash-landed on Earth, a normal great white shark is transformed into a mechanical monster that terrorizes the city of Seattle.

The Roboshark is nearly identical to a typical great white shark. However, its skin is smooth and metallic. Its eyes glow red and it has numerous glowing red "Tron lines" covering its body. The sides of its body are segmented.

The Roboshark possesses the following powers and abilities:

The Roboshark is killed after the Seattle Space Needle falls and crushes it.

Add a photo to this gallery
Retrieved from "https://movie-monster.fandom.com/wiki/Roboshark?oldid=695"
Community content is available under CC-BY-SA unless otherwise noted.