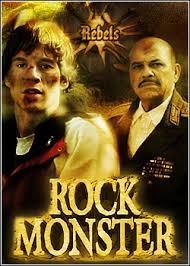 The Rock Monster is the main antagonist of the 2008 American fantasy-horror film Rock Monster.

When Jason, the descendant of a knight, accidentally removes the sword Excalibur from a stone while on vacation in Eastern Europe, he reawakens a giant stone beast once slain by his ancestor.

The Rock Monster is a giant humanoid creature composed of multiple large boulders. Several of its boulders are somewhat cracked, and there are numerous vines/roots wrapped around its limbs.

The Rock Monster possesses the following powers and abilities:

The monster is defeated after Jason slays it using Excalibur.

Add a photo to this gallery
Retrieved from "https://movie-monster.fandom.com/wiki/Rock_Monster?oldid=1252"
Community content is available under CC-BY-SA unless otherwise noted.