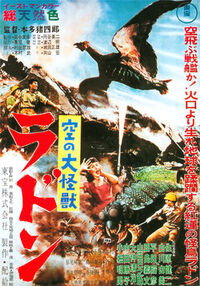 Rodan, known in his alternate form as Fire Rodan, is the main antagonist of the 1956 Japanese kaiju film Rodan and protagonist of several sequels.

Rodan was a giant pterosaur who, along with his mate, was awoken from his slumber by nuclear radiation.

Rodan is a reddish-brown bipedal pterosaur with a fully erect posture. He has an armored underbelly, a pointed beak, and two crests on the back of his head.

Rodan and his mate were seemingly killed in the lava flows of the volcano Mt. Aso. However, the film Ghidorah, the Three-Headed Monster revealed that Rodan himself survived. 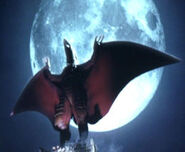 2019
Community content is available under CC-BY-SA unless otherwise noted.
Advertisement