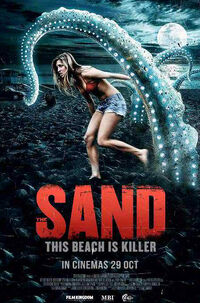 The Sand Jellyfish is the main antagonist of the 2015 American horror film The Sand.

When the tide goes out, the Sand Jellyfish hides just beneath the beach's surface and hunts for prey. When the tide comes back in, the creature is washed out to sea to search for another beach.

The Sand Jellyfish is an enormous jellyfish-like predator of indeterminate size. It appears to be bioluminescent and glows a bright blue color. It has numerous fleshy tentacles that appear to be prehensile unlike those of a normal jellyfish.

The Sand Jellyfish possess the following powers and abilities:

The Sand Jellyfish survives to the end of the film and is last seen swimming towards a new beach.