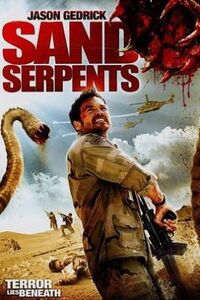 The Sand Serpents were gigantic earthworm-like creatures that dwelled beneath the desert floor of Afghanistan, where they attack a special forces group sent to combat the Taliban.

The Sand Serpents are large segmented worms with sandy gray skin. Their mouths are round, red, and lamprey-like, with numerous circular rows of teeth.

The Sand Serpents possess the following powers and abilities:

One of the worms is killed with a grenade, one is killed via helicopter fire, and another is killed after being blown up from the inside.

Add a photo to this gallery
Retrieved from "https://movie-monster.fandom.com/wiki/Sand_Serpents?oldid=1255"
Community content is available under CC-BY-SA unless otherwise noted.