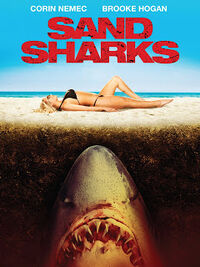 The Sand Sharks are the main antagonists of the 2011 American horror film Sand Sharks.

Capable of burrowing through loose sand at alarming speeds, Sand Sharks were vicious predators that terrorized the small island town of White Sands.

The Sand Sharks resemble great white sharks in body shape, but their skin is made up of large round scales of various shades of white and gray, giving them a mosaic look. They have very large dorsal fins and smaller second dorsal fins behind the first ones.

The Sand Sharks possess the following powers and abilities:

Add a photo to this gallery
Retrieved from "https://movie-monster.fandom.com/wiki/Sand_Sharks?oldid=2798"
Community content is available under CC-BY-SA unless otherwise noted.