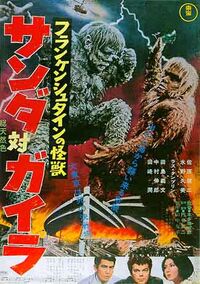 Sanda is the main protagonist of the 1966 Japanese kaiju film War of the Gargantuas.

Created from the flesh of Frankenstein's monster, Sanda was a much more gentle creature raised in the mountains by human scientists. Unfortunately, it was forced to fight its own brother.

Sanda is an enormous humanoid creature with a more human-like face than its brother and a coat of light brown fur covering its body.

Sanda and its brother are both killed after they are engulfed by an erupting volcano. 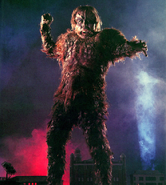 Add a photo to this gallery
Retrieved from "https://movie-monster.fandom.com/wiki/Sanda?oldid=2188"
Community content is available under CC-BY-SA unless otherwise noted.