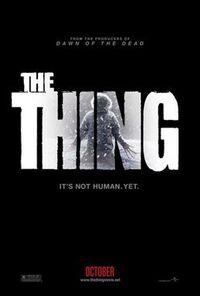 The Sander-Thing is a major antagonist in the 2011 American horror film The Thing.

While exploring the crashed alien ship, Kate is ambushed by the monstrous version of Dr. Sander Halvorson, which attempts to assimilate her.

The Sander-Thing resembles a vaguely humanoid body with numerous red fleshly arms and tentacles emerging from it. Its head is fleshy and tumorous aside from its face, which is an exact replica of the original Sander's face. The creature's "true" face is a lamprey-like mouth filled with teeth and more tentacles.

The Sander-Thing possesses the following powers and abilities:

The Sander-Thing is killed after Kate throws a grenade into its mouth.

Add a photo to this gallery
Retrieved from "https://movie-monster.fandom.com/wiki/Sander-Thing?oldid=558"
Community content is available under CC-BY-SA unless otherwise noted.