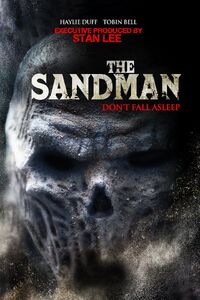 The Sandman is the main antagonist of the 2017 American horror film The Sandman.

The Sandman is a guardian spirit inadvertently created by a young girl named Madison, bent on protecting her and killing anyone who might harm her.

The Sandman resembles a tall emaciated humanoid figure made entirely of sand particles. Its face resembles a skull with no mouth and the sand patterns on its chest resemble a ribcage.

The Sandman possesses the following powers and abilities:

The Sandman is defeated after it is exposed to electrical wiring, turning it into glass and immobilizing it.

Add a photo to this gallery
Retrieved from "https://movie-monster.fandom.com/wiki/Sandman?oldid=1094"
Community content is available under CC-BY-SA unless otherwise noted.